Would you use the Microsoft Teams client for telephony?

Hello readers.  Nice to see you.  Hope you're well.

This is just a quick opinion piece to elicit some debate.

Given that Microsoft has announced that all of the features of Skype for Business Online in Office 365, including telephony features of Phone System (formerly Cloud PBX) and Audio Conferencing, are coming to Teams.  I ask, would you use the Teams client for telephony if you could?


The answer for me is less simple since I use Skype for Business Server on-premises.  But the question still stands.

Since the conversation window floats above the client, I'm free to go back to the client and start a new, separate conversation and put the two side by side if I wish.  One with voice and video and the other with IM only. 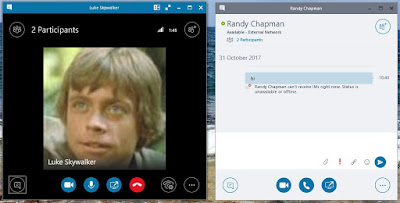 Teams, by comparison, is containerised.  Everything happens inside the application rather than floating above it in a separate conversation window.  You can still initiate a chat and escalate to voice/video, add people and share your screen in that conversation, but if you want to have another conversation at the same time, you have to click away from the first one and into another one.

Teams does currently have a nice little party piece in that if you do click away from a voice/video call, you get a little peek window at the top showing the video for the active speaker with call controls floating over the top. 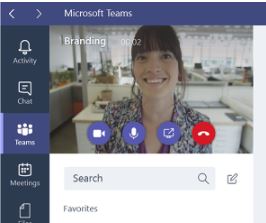 This happens in peer-to-peer and multi-party calls and in scheduled or ad-hoc meetings.  You still have to be in Teams to see it though.  If you switch apps, you can't see anything.

In Skype for Business, the call peek is floating free and independent of Skype for Business in general.  If you switch apps and go to Outlook during a video call, you get a call peek which floats above Outlook.  You can even move it wherever you want. 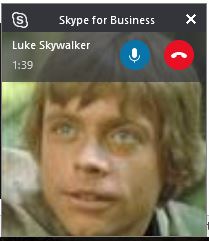 In Teams, the only way to get a floating peek is to share your screen in a meeting or call. 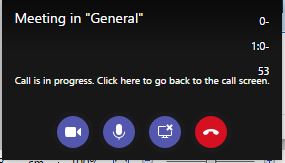 So I'm going on 17 years in this product line.  When Microsoft add something (consult Transfer in SfB client) I notice it, when they take away something (Consult transfer which was in OCS client and not in the Lync clients), I notice that too.

I'm more than a user of the product, but I am a user nonetheless.  Change is difficult.

Microsoft is saying to start using Teams alongside Skype for Business to get used to it.  The roadmap is out now and its clear that they have a rough timeline for feature migration.  Below is the calling roadmap which goes to the end of Q4 2018. 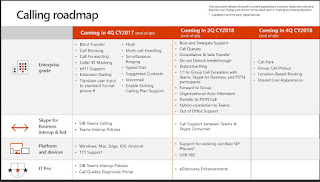 Things slip in roadmaps though, so don't hold your breath.

Back to the original question.

Would I use Teams as my telephony client?  Like I said, I'm on a Skype for Business Server back end, so my Skype for Business client has all of the features.  More, even, than Skype for Business Online with Phone System.  So I don't have to wait for 14 months for feature parity and I get to use a client I'm used to.  So for right now, the answer is no.

Fast forward 14 months and Teams has feature parity with Skype Online and Phone System.  I know I'll probably still have a Skype for Business Server back end, although probably SfB Server 2019.  I would imagine there will still be differences between the products, but I don't know for sure.

Differences aside, though, I would probably still edge toward no.  I would still miss the simplicity of the Skype for Business client for all the reasons listed above.  I'd probably be fine using both.

What do you think?  Would you use Teams for everything if you could?  Leave a comment here or hit me up on Twitter or LinkedIn.

I hope you found this useful.  Thank you for reading.

If this or any other post has been useful to you please take a moment to share.  Comments are welcome.