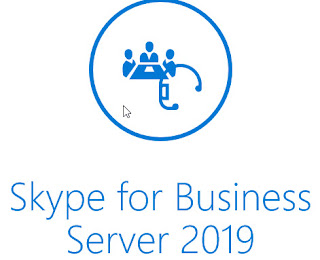 The two most notable (only) features are Cloud Voicemail and the Call Data Connector.

In its simplest form, UM allows callers to record a voicemail message for users.  This voicemail is sent as a media file to the users mailbox.  The recipient can listen to that message in a number of ways:

More than just Voicemail
UM can do a lot more than just record a voicemail and send it as an email though.  It also includes a bunch of features that I don't often see used.  Auto Attendants, Call Answering Rules and Outlook Voice Access are a great example of such features.

I've set up Exchange UM Auto Attendants for companies previously and used it instead of the Response Group Service in Lync.  It does work well, but most Lync and Skype orgs (probably) use RGS.  Remember, however, that Exchange UM isn't just for Skype for Business.

The one I don't think I've ever seen used is the Call Answering Rules.  Call Answering Rules are a way for a user to choose how calls are handled if they don't answer.  You're saying that's simple, it goes to voicemail right?.  The answer is if that's what you want to happen.  You can also configure a rule to transfer the call or try to find you.  You can also configure additional granularity for what happens when you get calls.  Apply to all calls or just calls from certain people or just when your out of office is on.  The list goes on.  You're also saying that you'd usually get the user to configure what happens to their calls in Skype for Business, right?  Well, yes, to a point.  You can configure additional call routing in Skype for Business.  You can configure Call forwarding or Simultaneous Ring to contacts, telephone numbers, team call groups or delegates.  UM kicks in if you have none of those configured or if you do, but the last action is transfer to voicemail.  Call Answering Rules start when the call leaves the telephone system (Skype for Business, Cisco etc) and hits your Unified Messaging mailbox.

Outlook Voice Access is a feature that is only partially used if at all.  Outlook Voice Access (OVA) allows you to call your voicemail from a phone.  You can either dial the pilot number and enter your extension and (Exchange UM) PIN when prompted to authenticate you or hit the voicemail key on your Skype for Business desk phone to go straight in.  It is common to use OVA to listen to messages and even change your greeting.  What's less common is using OVA to read your emails to you or list your calendar appointments or to access contacts.

The reason is simple.  Exchange UM was launched in Exchange 2007.  That was a simpler time, before modern day smart phones.  I had many of the predecessors to modern day smart phones.  I had a Nokia 9110 and a 9210 (look them up) and a Compaq iPaq and then several Windows Phones, I think mostly HTC.  I could get access to email and calendar using Active Sync or similar on all of those.  Blackberries and Palm Pilots were also being used by some, but it wasn't that widespread.  OVA reading emails and calendar appointments was a way to let people with "dumb phones" get at their info on the move.  Once the iPhone 3G was launched in July 2008 (10 years ago) with Exchange Active Sync support, that was it for OVA's advanced features.  They have remained in the product since then because why not.

As I said above, Exchange Server 2019 (Preview) doesn't have the UM role.  Right now, Exchange Online is based on Exchange Server 2016, which does have the UM role.  Before long, Microsoft will be upgrading Exchange Online to 2019 and thus killing the UM role in Office 365.  Now remember, Exchange Online UM can be used by Skype for Business Server and PBXs as voicemail.  For PBXs, however, time is running out.  Microsoft announced that they were discontinuing support for session border controllers to connect PBXs to Exchange Online UM over a year ago.  The initial deadline was July 2018.  This has been extended in April 2018 from July 2018 to to April 2019 to give people more time to prepare and find an alternative.  This, too, is clearly a precursor for UM being dropped from Exchange.


This is a way to give your on-premises users a voicemail service when they have no other options.  i.e. after they have upgraded to Exchange server 2019.

The Call Data Connector is a new feature in Skype for Business Server 2019.  It is a connector that pushes call data to the cloud service so that you can leverage the Skype for Business Online Call Analytics (CA) and Call Quality Dashboard (CQD) tools.

Call Analytics is a new(ish) feature in Office 365 that was the result of the acquisition of certain assets from Event Zero.  It is a portal that gives you access to call history and call detail records for users in Skype for Business Online with of without Phone System.  You can get to the Call Analytics dashboard using a dedicated URL - https://adminportal.services.skypeforbusiness.com/analytics/

...or from the User form within the Skype and Teams Admin Console (STAC) - that's what I call it anyway ;) at https://admin.teams.microsoft.com.

The Call Quality Dashboard is a dashboard that gives you complete insights into call quality overall.  Basically a series of graphs that show different metrics. 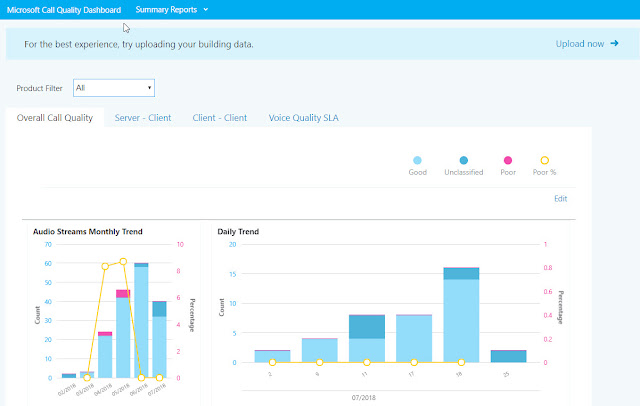 You can get to the Call Quality Dashboard from the STAC at https://admin.teams.microsoft.com.

...or a direct link here - https://cqd.lync.com.  It opens in a new page and asks for you to sign in again.

Lync and Skype for Business server have a role called the monitoring role.  This collects call detail records and sends them to a SQL database.  You can use SQL Server Reporting Services (SSRS) in conjunction with the monitoring reports to get at that CDR data and produce reports. 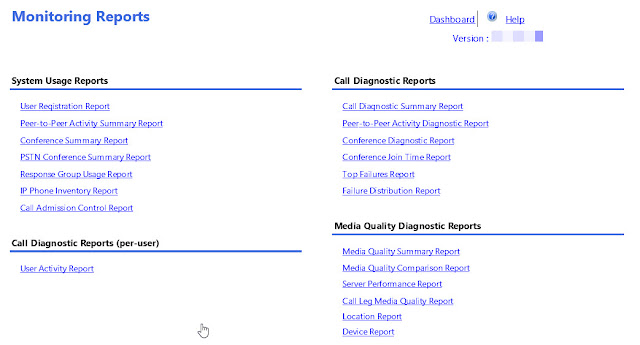 You can see usage reports to find out how used the system is or you can use it for troubleshooting failures of, not just calls, but all communications.

There is also a dashboard view. 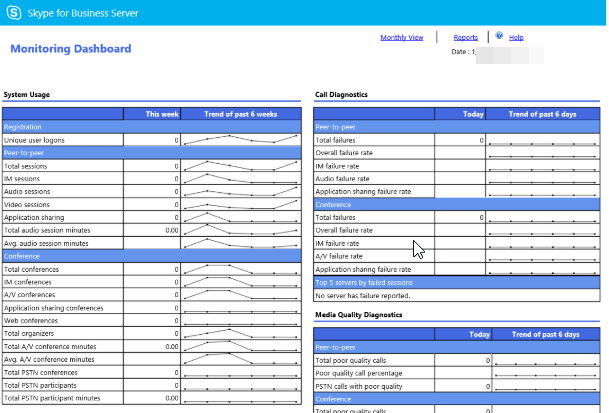 The monitoring reports have remained largely unchanged since they were introduced.  The thing is, you don't rely on Lync/Skype built-in monitoring reports as a stats tool in the same way you did a call logger like Proteus or Oak.  The reports do give you insights, but I would say it is more for admins to troubleshoot and do inventories than for call centre managers.  Since the data is just logged in SQL it means that it is possible to extract that data and use another application to slice and dice and produce reports that are meaningful to managers.

Stay tuned for part two or possibly two and three where I go though configuration steps for both Call Data Connector and Cloud Voicemail.

I was hoping to include it here, but I'm having all kinds of problems with Cloud Voicemail.  Perhaps I'm trying to do too much too early.  After all, it is a preview. 😉

If this or any other post has been useful to you please take a moment to share.  Comments are welcome.